Russian vs. Russian The recent influx of Russian fighters into the UFC including Rustam Khabilov, Islam Makhachev and Khabib Nurmagomedov is sure to spread the popularity of MMA across the former Soviet bloc. With fighters like this badass comrade, the future of our sport might look more Ivan Drago than Chris Weidman. Thanks to Chris […]

via In Russia, Leg Break is Submission Defense — Punch-Face.com

The difference between Combat Sambo and Krav Maga

Krav Maga is another popular martial art that people often come and ask me if it has any similarities with Combat Sambo.
Krav Maga meaning “combat contact”, in Hebrew, is a combat system that is said to used by the Israeli military. It has become very popular and is taught around the world with different Krav Maga organizations. 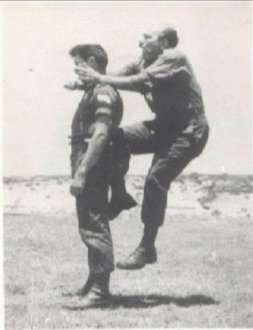 Both Combat Sambo and Krav Maga are systems used by the military and police, the former used by ex-USSR republics and the latter by Israel.
Within Combat Sambo there are generally 3 ‘types’ within this system. Sport Combat Sambo (ie.MMA with a jacket), street Combat Sambo (reality self-defense suited for civilians) and military Combat Sambo.
Generally in the majority of Combat Sambo gyms (like Club Kozak) teach the sport and self-defense versions. The military version has added techniques of weapons fighting eg. Knife, bayonet etc… These are…