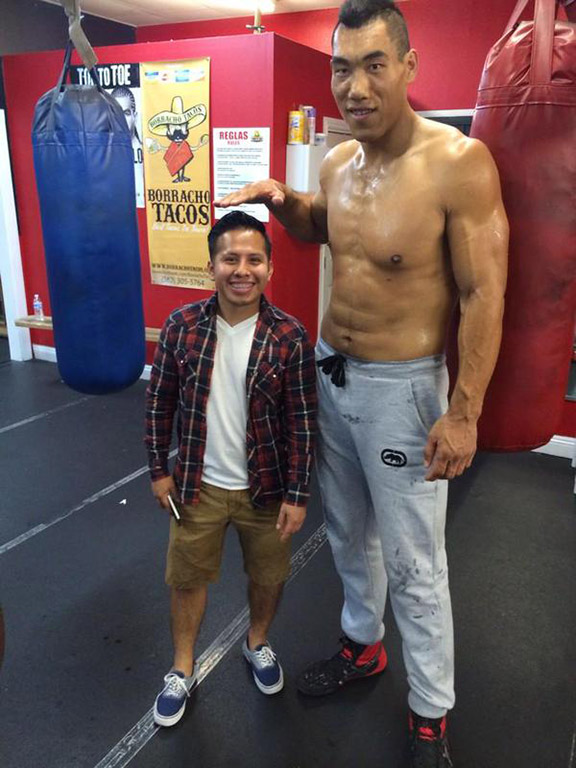 The Chinese fighter, given the nickname “The Great Wall” for obvious reasons, stands at a whopping 7-feet and weighs in at 286-pounds. He might just be the most intimidating boxer walking this earth, even though he has no amateur experience.

In a stereotype that will make every tall person sigh, Dong was formerly a basketball player. He didn’t think twice about changing sport, however, as he told Fox Sports.“The transition wasn’t really hard,” said Dong. “Nowadays I have to concentrate on fewer things, since I only have to apply punches and protect the upper part of my body.”

1965 was a pivotal year for the traditional Chinese martial arts in North America. Simply put, it was the moment when everything changed.

While a handful of non-Chinese students had been studying these fighting systems in the US since the late 1950s, most western martial artists got their first detailed look at Kung Fu in January of that year. Ark Yuey Wong, an established master of Guangdong’s southern Shaolin methods, was the one who declared that the door was open.

While it is often debated which instructor was the first to teach non-Chinese students, for most American martial artists the dawning of the new era was announced by the January issue of Black Belt magazine.  Wong, dressed in a black Kung Fu suit…

Telling Stories about Wong Fei Hung and Ip Man: The Evolution of a Heroic Type

A statue located in the Wong Fei Hung Temple in Foshan.

****We recently completed the “500 Likes” challenge at the Kung Fu Tea Facebook group.  As a result I let the readers vote on what two articles they would most like to see covered.  There were a lot of good suggestions but no overwhelming favorites.  However, a number of you wanted to see “something” related to Hung Gar.  So the following essay will discuss Wong Fei Hung’s evolving role in southern Chinese popular culture.

I also noticed that there was another group of readers who wanted a post on armed escort services in the late Qing/early Republic period.  If I can find some solid resources to work with, that will be the second essay that I write.  This one may take some time as its a tougher subject to research.  Once again, thanks for all of your support!****

The history of martial arts in China is one of contradiction and ambivalence. Despite its obvious utility, it was always viewed as a dangerous tool which needed to be controlled. Its practitioners were both legendary heroes and member of the least desirable classes. Finally, in the 20th century it was viewed as a clear product of the feudalistic past which reformers were struggling against yet also as a potential solution to the dilemma of the “sick man of Asia.”

Traditionally, Chinese martial arts were military training, used in hand-to-hand combat among the large infantry forces pitted against each other. The idea that Buddhist monks, Shaolin or otherwise, and Daoist immortals, Wutang or otherwise, had any major role in the development of Chinese martial arts has no basis in reality. The Han Dynasty Historical Bibliographies (c. 90 A.D.) contain an entry on boxing or “shou bo,” categorizing it as one of…

by Dan Docherty
The Beginning – Chinese Cosmology
From:http://www.taichichuan.co.uk
Before looking at the Tai Chi symbol and Yin Yang theory it is helpful to examine Chinese concepts of the Universe. The basic Chinese cosmology traced from c.1000 BC and developed by succeeding philosophers and schools of philosophy is as follows:-

Something and nothing mutually gave birth to one another (Lao Tzu Ch. 2)

so we have Wu Chi yet Tai Chi; Wu Wei (not to act against Nature) is Tao and from it came

of form and shape which caused

of Qi (breath/energy) and then

which brought the formation of substance and was the origin of

known as Yin (passive, female) and Yang (active, male), the interaction of which produced

which produced the Ten Thousand Things, including

which is composed of Yin and Yang.

Much of the theory and terminology of Tai Chi Chuan is derived from these concepts and terms and those who formed and developed the art would have been well-versed in them. The original symbol for the concept of Tai Chi seems to have been a simple circle. This is logical as once we have a circle there is an inside and an outside; what is enclosed and what is not; what is circular and what is not; we have Yin and Yang. The inspiration for the circle may have come from the sun or moon. Over the years what was the symbol for Liang Yi (Two Forms – i.e. Yin & Yang) replaced the simple circle and became known as the Tai Chi symbol.

Chou Dun-yi (1017-73) was the most outstanding representative of the Tai Chi Diagram Sect, one of three Taoist sects which trace their origin from the great 10th century philosopher Chen Duan from Hua Shan. We can see from the Diagram that Zhou was concerned with Five Element theory as well as Yin Yang theory.

The Diagram is effectively a simplified version of the Chinese system of cosmogony which we looked at earlier. Starting from the top we have, “Wu Chi yet Tai Chi”. Tao and Tai Chi must come from that which is not – Wu Chi, but if there is Wu Chi then there must also paradoxically be Tai Chi. We can see the concept of Wu Chi (No Pole/Ultimate) as being a Taoist one and the concept of Tai Chi (Supreme Pole/ Ultimate) as being Confucian. The Confucians sought order in the universe, in society and in the individual so the idea of a fixed point such as the Pole Star as a sort of centre from which order in the universe stemmed was very attractive The Taoists were more concerned with harmonious change so the idea that there was no one fixed pole, Wu Chi, but instead constant change made perfect sense. The statement Wu Chi yet Tai Chi reconciles these different approaches.

Below the empty Tai Chi circle we have the concentric half Yin half Yang circles in which the Yang manifests itself in motion which when it reaches its limit is followed by Yin which is manifest in stillness; in turn when stillness has reached its limit there is a return to movement. In this way, movement and stillness, Yin and Yang in turn each mutually becomes the source of the other. This is precisely what happens in Tai Chi form, in pushing hands and in self defence.

The interaction of Yin and Yang produces the Five Elements of Metal, Wood, Water, Fire and Earth.

The Five Elements can operate in either a generative or in a destructive cycle. For example in the generative cycle:- Metal produces Water; Water produces Wood; Wood produces Fire; Fire produces Earth; Earth produces Metal. This is in accord with Nature and can also be represented by the clockwise rotating Tai Chi symbol. In the destructive cycle:- Metal destroys Wood; Wood destroys Earth; Earth destroys Water; Water destroys Fire; Fire destroys Metal. This is contrary to Nature and can be represented by the anti-clockwise rotating Tai Chi symbol.

Using Yin Yang theory each Element is stronger than two of the other Elements and weaker than the other two. Furthermore, each Element individually also has Yin and Yang aspects. Thus Metal could be shiny or rusty. Water could be a puddle or a vast river.

The small circle below the the Five Elements and joined to them by four lines again represents Wu Chi where they unite.

The final circle represents the birth of the ten thousand things caused by the interaction of the male and female principles and their return to the one Tai Chi (Supreme Pole). Three thousand years after these concepts and terms first appeared we are still putting them into practice in Tai Chi Chuan yet how many Tai Chi practitioners realize that such concepts even exist never mind that they should be putting them into practice.